I stumbled on tlrtense's Twitch channel the other day. He plays Vanu but I can forgive him for that since he turned me onto Open Broadcasting Software. I've been using XSplit for my stream when ever I wan't to do any fancy overlays but to get the best performance using game capture or stream 1080p you have to pay for it. I got a 1-month trial with my AVerMedia Live Gamer HD capture card and I eventually paid for a 3 month subscription when the trial expired. 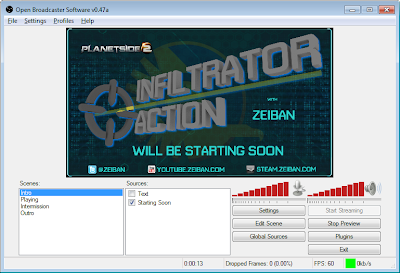 OBS is a free open source streaming software very similar to XSplit. Some would say it's almost identical if you strip away all the fancy UI look and feel  from it. It has scenes and various elements you can overlay on your stream. I've only attempted to stream to Twitch but other options exists. The real advantage that OBS has over XSplit (besides the price) is encoding performance. I don't know what OBS is doing different but my FPS drop in PS2 is considerably less that XSplit when using the game capture. I can stream 1080p @ 60 FPS with very little frame rate drop. 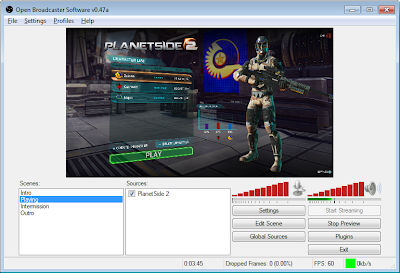 The only drawback I did see during my tests was it seems to perform much better on Intel than AMD processors. I doubt this will be much of an issue for most PC gamers as anyone buying new hardware the past few years has gone Intel anyway since AMD just hasn't kept up in performance or the market for the past few years. I think some of this has to do with developers just not prioritizing  AMD optimizations because of the lower market share.